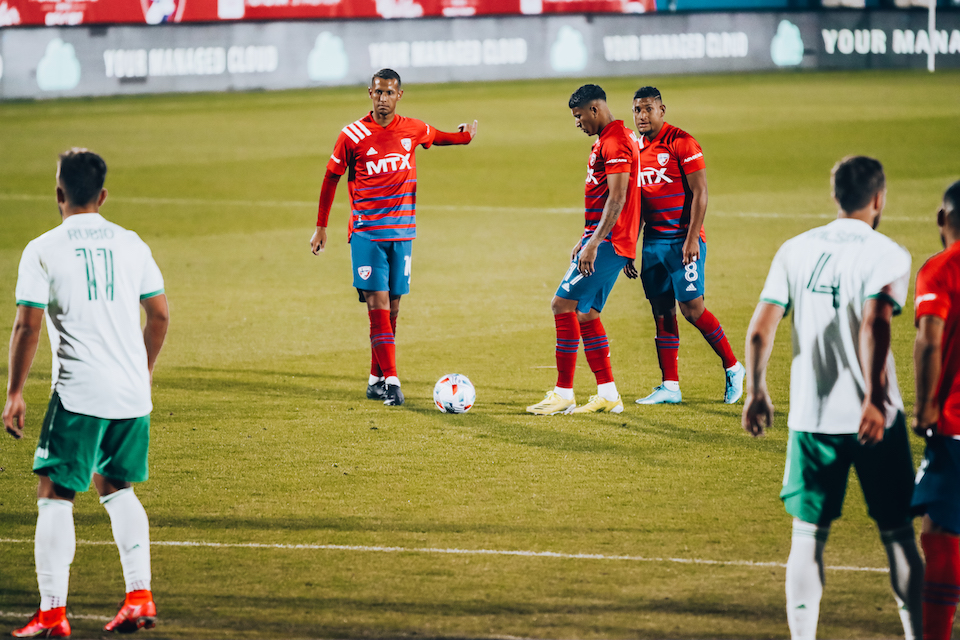 FRISCO, TX- FC Dallas (1-1-1) hosted their third home match of the season and came out with a 1-1 draw against Houston Dynamo (1-1-1) at Toyota Stadium on Saturday afternoon.

Saturday’s match was the first encounter of the season for these two state rivals. The last time they met on the field was on October 31, 2020, when FCD took the three points after a comfortable 3-0 win.

Luchi showcased his starting lineup with only one change from his team’s win against the Timbers this past Saturday. Argentine striker Franco Jara would take Ricardo Pepi’s spot leading the attack in today’s game.

FC Dallas had a good start in the first few minutes of the game. Both flanks of the field were creating chances to score but were unsuccessful in their attempts. Both teams had numerous goal attempts but very few shots on target. FCD managed to get three shots on target, while the visitors achieved two shots on target.

Near the 30-minute mark, a penalty was called in favor of Houston after a handball in the box by Bressan. Former FCD player Fafa Picault did well with his attempt by sending Megiolaro the other way and putting his team in front of the scoreboard.

When things seemed like Houston would go on the break ahead in the score, Colombian winger Jader Obrian saw his goal attempt turn into a goal that would level things up in the Texas Derby. Obrian scored his second goal in the season and back-to-back games. Obrian mentioned that he’s been feeling more comfortable as the games go by. He said he had worked humbly enough for a starting position which he has gotten reasonably quickly since his arrival.

“I’m happy for the goal, Obrian said. “It’s a bittersweet feeling knowing it’s a derby match and we didn’t come out with the desired result, but we must look forward now to what comes ahead.”

That's how you introduce yourself to the Texas Derby.

The second half was very similar to the first half, with not much to offer. Bryan Acosta had a good game himself, creating opportunities and outstandingly controlling the midfield.

Luchi brought on the 20-year-old Hungarian Szabolcs Schön to make his MLS and Texas Derby debut. “Schön is in form and in shape,” Luchi said. “He was good in small spaces and big spaces, and he showed his electric, good movement, all the good qualities to help us going forward.”

Obrian had a few opportunities to get his team to lead but was unlucky to find his chances blocked or stopped by the keeper. Both teams towards the end went back and forth in the field, but no clear-cut chances on both sides to get ahead in the game.

Bryan Acosta was rightfully named man of the match, dominating the midfield with his firm possession, precise passing, and even making a 40 to 50-yard run to stop a deadly counterattack that could’ve led to Houston scoring a goal.

Head coach Luchi Gonzalez gave his thoughts on today’s Texas Derby game. “I saw us do positive things in the first half,” Luchi said. “We did well to control the game with possession. We lacked quality from the first half compared to the second half.”

“It wasn’t one of our best games,” Ricaurte said. “They closed the spaces very well and forced us to attack wide, but we were not successful.”

Paxton Pomykal shared his thoughts on today’s match, mentioning how he felt this was a derby match despite the game’s momentum and speed decreasing towards the end of the game. “I try to take it upon myself to bring the energy,” Pomykal said. “I was hoping that my energy could feed off to everyone to bring the pace up.”

FC Dallas goes on the road next week where they’ll face-off against Minnesota United (0-0-3), which could help FCD go up a few spots considering their opponent’s current form. FCD’s next home game features Real Salt Lake (2-0-1) on Saturday, May 22, 2021.