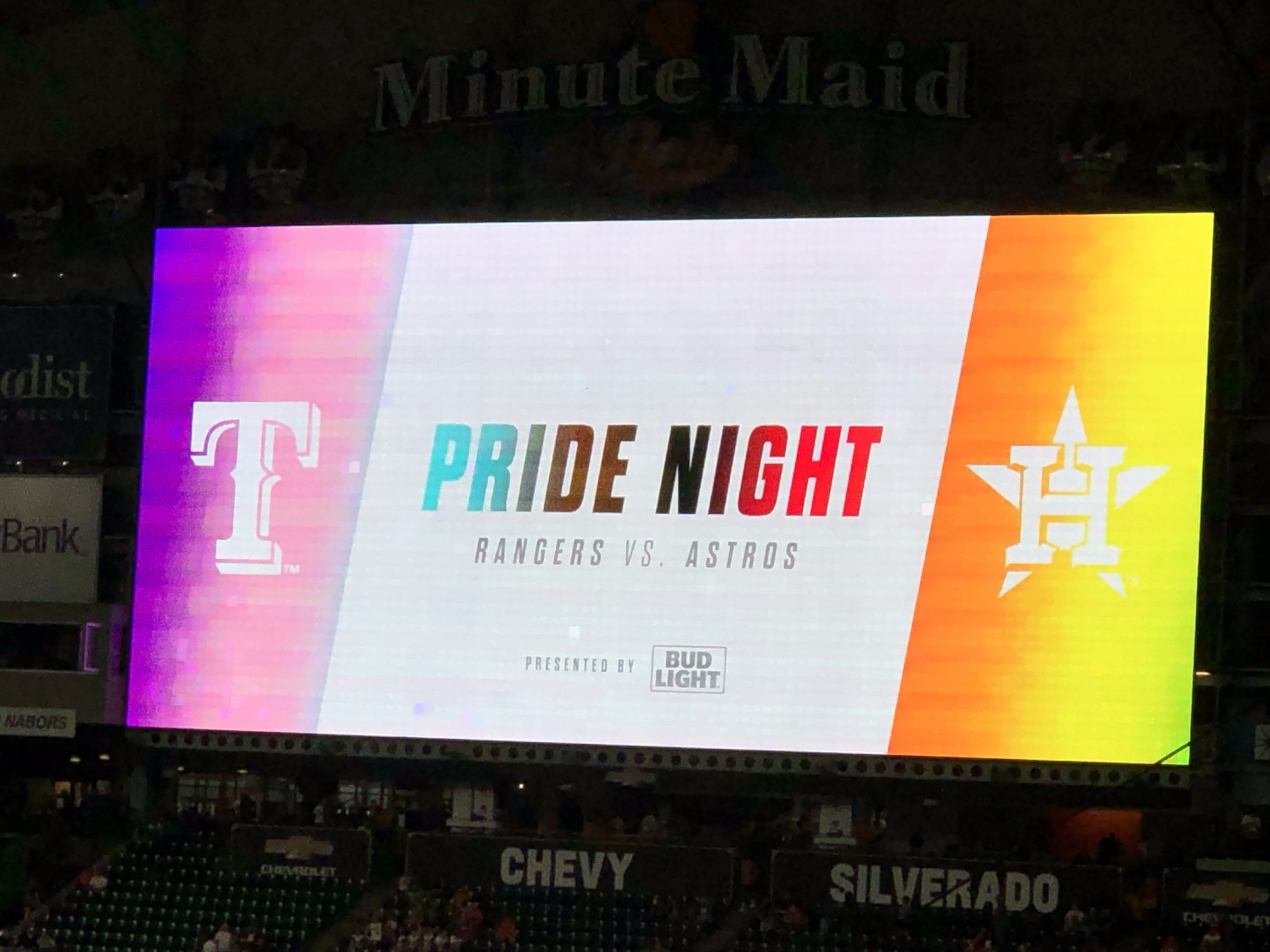 In the midst of Pride Month, Rangers players and coaches share their thoughts on the eventual possibility of an openly gay teammate in MLB

In the midst of Pride Month, Rangers players and coaches share their thoughts on the eventual possibility of an openly gay teammate in MLB

We wind down to the final week in June, along with the end of Pride Month. 23 MLB teams held or were scheduled to hold a Pride night in 2021. The Mariners, Angels, Marlins, White Sox, Padres, Blue Jays, and of course the Rangers remain the seven that didn’t. For the record, I’m excusing the Blue Jays because they are playing in Buffalo, and with the uncertainty of where Toronto plays, they don’t have any promotions in 2021.

Right now, baseball doesn’t have an active out player in the LGBTQ+ community on any of the thirty teams. Still, with minor league and major league rosters reaching around 150 players combined per organization, I would think there are players in the LGBTQ+ community, just not comfortable going public with it. The Rangers witnessed two Pride nights on their previous road trip (one in Los Angeles and one in Houston).

In the midst of batting practice, I asked four Rangers (two players and two coaches) their thoughts on if baseball is ready to take that next step. Yes, I kept their identity private (planned by myself) to gauge where the players are at and what an out player would mean in a clubhouse setting. 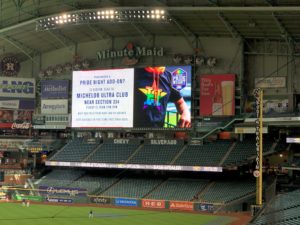 Why do you think there’s no openly gay or bisexual active player in baseball?

Coach 1: I don’t have a good answer for that. If I had to guess if there are players who feel that they’ve been considered, they don’t feel comfortable being public for whatever reason. Maybe they feel like [the team] wouldn’t accept them for whatever reason. It’s the same situation as people in normal society do, and many people are afraid to come out and let the parents know, or the loved ones know. I would think it’s a tough situation, thinking [the player] wouldn’t accept them.

Player 2: I think that no one has openly come out yet because it’s stressful enough just trying to perform well in the major leagues. When you add that spotlight onto the long list of things needed to [succeed] in baseball, it is easy to see how people could potentially keep that to themselves.

Coach 2: Good question. I’m not quite sure, honestly. [For] the most part, you’re starting to see more acceptances towards everything to whereas kind of earlier it wasn’t that way. I can’t speak for other people, but for me, I try to judge people if you’re a good person or a bad person. To me, it doesn’t matter. I guess the best way for me, I can’t speak for everybody else, is if you treat me well and you show me respect, you should get the same back. Treat people how you want to be treated. I don’t know why or if there’s an issue. For me, there’s no issue. 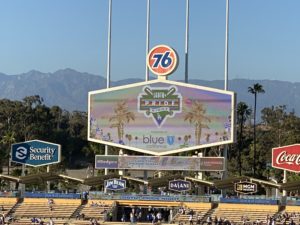 Do you think baseball is ready for an active player to come out?

Player 1: I think so, Clubhouses, everybody is different, and we try and accept everybody for their differences, and it’s all about self-respect and mutual respect among the teams. I don’t think that would change anything with the team. [Looking back] ten years ago, I’m not sure how things were back then. As far as now, I think everybody would treat each other with respect.

Coach 1: I don’t think baseball is on the side of judging it. It depends on the individual and their comfort level. I don’t think anybody in baseball would be judgmental. It thinks it would depend on whoever that individual would be and whether he would be comfortable in this environment and making that a known fact. I don’t think that it would be where his team would view him any different. A clubhouse is so diverse to start with. You have so many different ideas, beliefs, cultures, and everything is so different. We embrace everybody because this is a real family. We love each other, and we have the same common goal [which is] playing baseball. I think that’s where the focus would be about.

Player 2: I think as society has changed, so have the players, and I’d like to think now teams would be more open to accepting a player who is openly gay. It’s very easy to hide behind the term “traditional” when describing baseball values, but one thing is certain, if you’re a good teammate and you can play ball, teams will be willing to give you a shot.

Coach 2: Billy Beane, baseball has kind of embraced him. [The] last couple of Springs, he’s come out and talk to us about the COVID stuff, and he would be open to it and will hear it. Who am I to pass judgment on anybody. I don’t think that’s right or fair. I’m kind of in a small bubble in my own life with what I have going on with my family and trying to take care of them. I don’t know what the issue or problem is. That’s kind of where I’m at with it.

If a player would come out to you personally, how would you react?

Player 1: I try to support them however I could, whatever it looked like and however they wanted me to show that support. I’d be there for them; I’d like to think I will be a guy who respects people no matter who they are.

Coach 1: Me personally, it wouldn’t have any bearing on whether or not that individual can play baseball or not play baseball. Whether I agree with that lifestyle or not, I can still love the individual and not agree with their lifestyle. I think that’s with society. We have to be about loving people and not judging things that we agree with and disagree with. Some things are outs not to judge. I am a Christian. I believe that God is the ultimate judge, and he’ll decide people’s fate. I’m not perfect, and no one is perfect, so who am I judge someone. I can love everyone, and that’s the way I look at it.

Player 2: My first reaction would be to support them however I could, I’m sure there would be plenty of praise and potentially some backlash, but I am hoping the positive would outweigh the negative. I can only imagine the pressure that can put on a person, and allowing someone to be who they are should be second nature. Happy teammates play better baseball!

Coach 2: The only thing you can do is support them. Either way, we support in this environment. We support people who have off-the-field issues, family issues, with a bunch of different things. I feel the best way to support any way you can. We’re all people; we’re all created the same. I feel whatever the challenges, you embrace them. You say how can I help or what can I do, and show them you care. 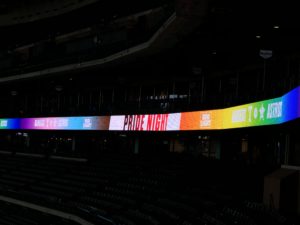 Have you had a teammate or a player came out personally to you?

Coach 1: I’ve never had a player come out, but I’ve had really, really, really close friends. People I’ve considered brothers that are gay, and that’s not my preference based on my belief biblically, but I still love the individual.

Player 2: I have not, to my knowledge, ever had a teammate or former teammate come out as gay.

It appears baseball is ready from the responses, and teammates would embrace it if a player comes out. Sports consist of individuals with different backgrounds and cultures with one common goal, to play baseball. In my honest opinion, Rangers players, coaches, media, etc., have treated me the same as two years ago (the same awkward self as I am and embrace). I can’t speak on the other 29 organizations and their viewpoint, but with this younger clubhouse, the Ranger players and coaches would accept with open arms. The lack of Pride night at Rangers’ ballpark doesn’t fall on the players. Happy Pride Month, everybody.

Today marks the one-year anniversary of me going public about who I am. The fact one year later I’m in LA for pride weekend covering games brings so much joy. #Pride2021 pic.twitter.com/5jkUxkRI2U