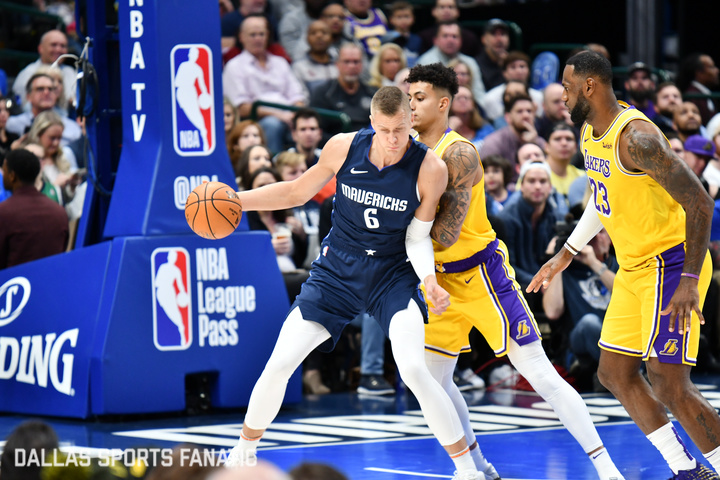 The Dallas Mavericks fall 108-95 to the first-place Los Angeles Lakers on the second night of a back-to-back.

After beating the Lakers on the first of this month, 114-100, LeBron, AD and company were ready for redemption as the two star-studded teams went head-to-head once again.

Luka Doncic’s 100th career NBA game didn’t go as he would have liked. It was one of those games where the shots weren’t falling for him. He actually is still human.

Luka ended the night shooting 5-14 from the field (0-6 from three) with 19 points, four rebounds and seven assists. To go along with that, six turnovers. Needless to say, it wasn’t Luka’s night.

It wasn’t Kristaps Porzingis’ night either. He appeared to be non-existent tonight with his 11 points and seven rebounds. He flashed with his three-point range, hitting 3-7, but that was it for the unicorn on the night.

Even in their youth, back-to-back games get the worst of Doncic and Porzingis. Tonight showed that to be the truth. The entire team shot 36 percent from the field and 30 percent from three.

Early in the first quarter, the Mavs took a huge blow when Tim Hardaway Jr. left the game with a left hamstring injury; he did not return. After a steal leading to a break-away dunk, Hardaway Jr. looked as if he pulled his hamstring while running back on defense.

Hopefully, it was just a cramp or a slight pull because he has been playing stellar ball as of late. Whatever the case, we’ll keep you posted as soon as we receive updates on his injury status moving forward.

For now, this is what he has to say about the injury:

Hardaway on his injury pic.twitter.com/mu5uIPyBNl

Lakers frontcourt too much

Anthony Davis, Dwight Howard and Javale McGee had their way under the rim in tonight’s contest. Each of the three bigs combined for 49 points while shooting 19-25 from the field. That can’t happen on any given night.

LeBron contributed greatly to his teammates with 13 assists and about half of them were full-court outlet passes to either Davis or Howard for an easy dunk. You know what I’m talking about – it’s a highlight every night on SportsCenter.

Tonight, LeBron hit another milestone in his illustrious career with 9,000 assists. One of nine players to ever meet that feat over any career in NBA history.

The Mavs will look to bounce-back in Oklahoma City on New Year’s Eve with the tip-off at 7:00 pm. aka the final Mavs game of the greatest decade the franchise has ever witnessed.