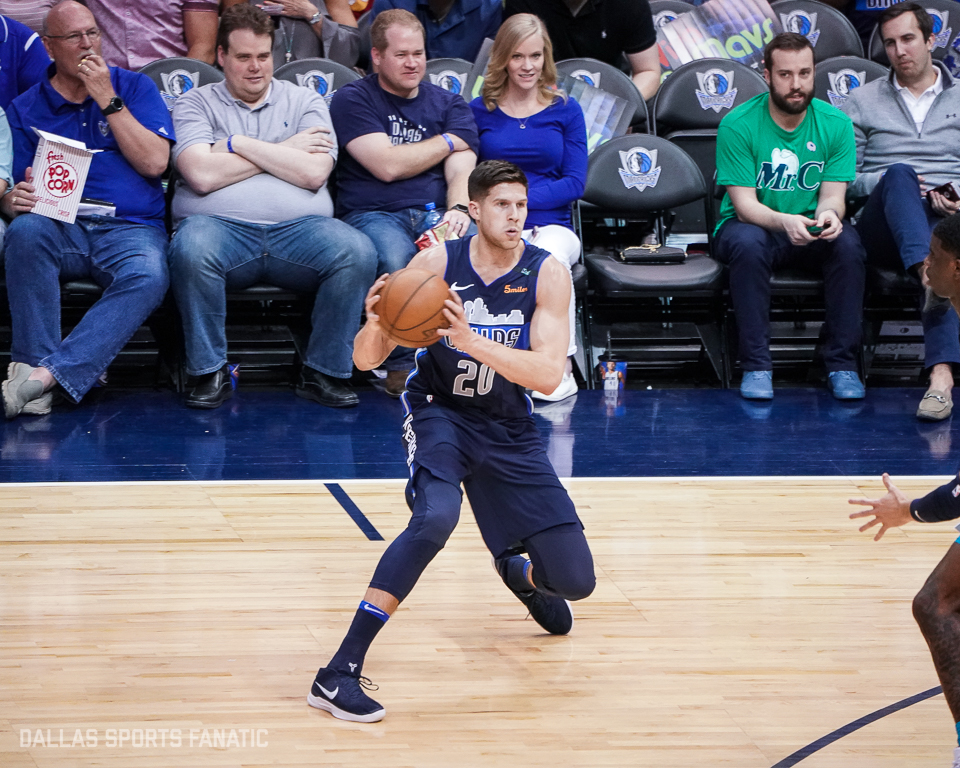 Doug McDermott and Seth Curry flourished from the three point line in Rick Carlisle’s flow offense. In the 26 games that McDermott played in a Dallas uniform he shot an absurd 49.4% from three. Curry, who sat out the 2017-2018 season, shot 42.5% from three during his 70 game career with the Mavericks. McDermott signed a three-year deal with the Indiana Pacers and Curry signed a two-year deal with the Portland Trailblazers this week. The Mavericks have now lost two players who helped space the floor and efficiently knocked down open jumpers in a matter of days. This is a problem in today’s NBA which values outside shooting more so than previous years.

The Mavericks have a couple wing players who can fill the void, but they haven’t been as effective from three as McDermott or Curry. Wes Matthews is an obvious candidate to take some of their shots. Matthews only shot 36% and 38% from three the past two seasons. His career average before rupturing his achilles and joining the Mavs was closer to 39.5%. Harrison Barnes, who has said he likes playing on the wing instead of in the post, saw his three point percentage jump to 37% the last 30 games of the season once he was moved to the small forward position more often. He finished the season with an average of 34% from three.

The most likely current Mavs player to take both McDermott and Curry’s minutes off the bench is Dorian Finney-Smith. Finney-Smith has been working on his three point shot during the offseason last year and this year. He has pointed out that his outside shooting is something that him and the coaching staff wants to improve. For his career he is a 29.5% three point shooter. Not exactly what you are looking for to replace wing players who shoot 49% and 43% from three. But, he also has a length and defensive tenacity that neither Curry nor McDermott can compete with. Shooting 40% from three is a long shot for him, but 35% is a more realistic and achievable goal. I think the Mavs will be pleased if they can get him to that average while he is wreaking havoc on the defensive end.

Most of the big name free agents are no longer available. If the Mavs choose to pursue a wing player who can shoot that is a free agent the pickings will be slim. The types of players they are targeting would have to come here on veteran minimum or close to minimum deals once Dallas gets the Dirk situation figured out.

Wayne Ellington is someone the Mavs should look at to replace the production left by McDermott and Curry. Ellington is a career 38% three point shooter who shot 39% from three with the Heat last year. His best shooting year came in 2013-2014 with coincidentally, the Dallas Mavericks. In the 45 games he played for the Mavs he shot 42.4% from three. A reunion with Rick Carlisle’s system could help him get back to the 40% mark. The problem is Ellington isn’t that great of a defender, though McDermott and Curry weren’t either. He doesn’t contribute much to the stat sheet other than scoring from deep. The other problem is that teams are paying a premium for shooting and there are reportedly 23 other teams interested in him per the Associated Press. Dallas would have to find a way to pay him what he wants or lose out. Because of the pay circumstance and Dallas probably offering only a one-year deal to keep the cap open for 2019 free agency, I doubt they get him.

James Ennis III is another wing player they should look at. I like his fit more than Ellington because Ennis is 6 foot 7 inches tall and can play both shooting guard and small forward. Ennis is a career 36% three point shooter. In 20 minutes per game with the Pistons last year he averaged 7.5 points and 2.5 rebounds with less than one steal and one block per game. Though those numbers aren’t eye opening, they are serviceable and I bet Carlisle could get the most out of him. He also fits the Mavs timeline as he is only 28.

Richard Jefferson is an option although he is older. He will be 38 years old in the upcoming season. But he played in Dallas during the 2014-2015 season and shot 42.6% from three, which was close to his career best 44% in a season. He is a career 38% three point shooter. However, at this stage of his career he is a defensive liability and mostly just a spot up shooter who doesn’t move around screens like McDermott and Curry could. This is a less likely option as he has not even said that he is looking to play next season. He could fill the three point shooting production but would be a massive liability on defense as a wing player.

Jason “The JET” Terry is my favorite one on the list just for nostalgia purposes. Terry will be entering his 20th season in the NBA this year and will also turn 41. How cool would it be to see both Nowitzki and Terry play their 20th and 21st seasons together one last time before they hang it up? He would be a liability just like Jefferson and Nowitzki on the defensive end but Terry can still shoot the ball. The past two seasons he shot 43% and 35% from three and is a career 38% three point shooter. He also indicated to Dallas Sports Fanatic that he would like to keep playing ball.

The Mavs are cash strapped due to the signing of DeAndre Jordan to a one-year, $24.1 million deal. They still have the mid-level exception to give to Dirk but after that the money is pretty much non-existent, which limits their options in terms of replacing the production of McDermott and Curry with a free agent. It will take a magic trick in terms of cap space manipulation to pull off signing any of the players listed above. Their best bet is to continue developing the players they have and see if they can come through for them.