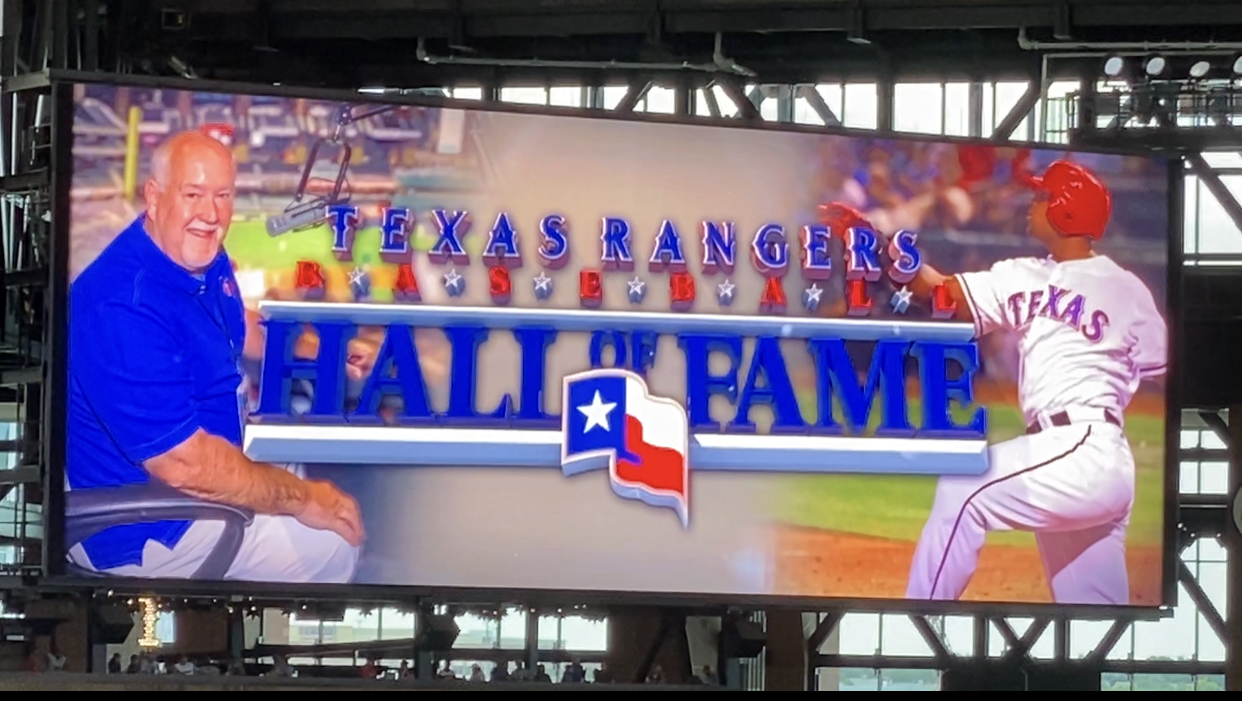 Congratulations to Adrián Beltré and @TEXPAMAN on the Rangers Hall of Fame Induction. #StraightUpTX

Adrián Beltré and Chuck Morgan are staples in Texas Rangers history. Adrián’s eight years in a Rangers uniform provided some of the greatest plays I’ve seen from the television screen, but it wasn’t about that only. It was about the type of teammate he was on the field. “He means a lot to our organization,” Isiah Kiner-Falefa told me. “He’s not here, but he’s still kind of a leader. We try to do everything that would make him proud.”

In his eight seasons as a Ranger, Beltré hit 199 homers, hit .286, and had an OPS of .819. All eight seasons, he had Elvis Andrus by his side. “He was always a big brother figure since he got to the team. I was able and blessed to be right next to him. Not too many guys get the opportunity to play alongside a future Hall of Famer,” Andrus told me Friday. “It was a thrill for me, and it was a great amazing day every time we stepped on the field. No matter what we were doing, we always make sure we’re going to have fun no matter what.” Unfortunately, Elvis couldn’t make it Saturday night. “I talked to Adrián. We talked a week ago about going to see each other and enjoy his day. I knew it was going to be around this time for my baby. I called him a few days ago and said I’m sorry. He tried to act like he was mad, but I know him.”

Elvis Andrus told me today that he won't be at the ballpark tomorrow for the Adrián Beltré ceremony.

He and his wife are scheduled to have their third baby tomorrow. He's leaving tonight.

Elvis said Adrián tried to act mad, but he congratulated him. #StraightUpTX

David Murphy played in three seasons with Adrián in the Rangers’ organization. “When I’m asked about ultimate competitors and ultimate teammates, the Michael Youngs, the Vladimir Guerreros, and then Adrián is always in that conversation,” David told me. “What I saw playing against him and playing with him and not just what he was able to do on the field, but the qualities he brought to the clubhouse. The most impactful thing for me was how loose he played the game. He was motivated by the love of the game.”

“It’s awesome. I can’t wait to see him,” Jose Trevino told me. Trevino said his leadership and professionalism are the biggest takeaways. “Watching him work, he was trying to get better every single day.” Spencer Patton was teammates with Beltré but never got too close. Still, [he] left an impact on Patton. “What else can you say that probably hasn’t already been said? Huge impact in this organization, team leader, seemed like everything followed through him,” Patton said.

Rangers’ reporter, Emily Jones, was another individual who could talk to Adrián during his playing days. “He’s now a dear friend. If you would have told me that would be the case ten years ago, I would have told you [that] you were crazy,” Emily told me. “When he came here, there was an aura about him. I’m not easily intimidated or anything like that, but there was an intimidation factor with AB. It wasn’t intentional; it was this thing about him.” Emily said once the walls broke and he became a leader in the clubhouse, it developed as one of her favorite relationships she’s developed.

Is the Rangers’ Hall of Fame it for Beltré? According to Isiah and others, absolutely not. “This is just one of the cool things he’s going to do. The real Hall [of Fame] is going to be the big one, but this is just a warmup for it,” Kiner-Falefa told me. “We’re just waiting for him to get the real call.”

Even though Elvis Andrus couldn’t make it, that doesn’t mean he didn’t have some nice words for Adrián Beltré. Along with Fergie Jenkins, Pudge, Nolan Ryan, Charlie Hough, Jim Sundberg. #straightuptx pic.twitter.com/etmXtvSUWW

Chuck Morgan is the voice of the Rangers. Fans recognize it every time they hear it, whether in person, on the radio, or hear it through the television. “Remarkable career at the ballpark,” Elvis said. “The voice, he’s the Rangers voice. I got to know him through the years [and] talk to him. [He’s] an amazing human being.”

“He’s been here for so long,” Kiner-Falefa told me. “He’s a part [of] the players. I think it’s cool, and it’s a good thing that the organization is taking the time to acknowledge him.”

“Chuck is one of those guys that when people come to me with questions or wondering about something and if I don’t have the answer, the first place I go is Chuck,” Emily Jones said to me. “Not only will he have the answer, but he’s not going to dismiss it. He’s going to take care of it.

“For him to announce my name, I think that’s pretty cool,” Jose Trevino told me. “The other day, we came here, and we took a tour of the stadium. My son loves this place. We went into his booth, and he said my son’s name, so I love Chuck forever for that.” Chuck reached his 3,000th milestone at the end of last season and is still going strong.

“It’s so cool to have that consistent voice. I got to experience that as a member of the Rangers’ franchise,” Murphy told me. David said he would go to Rangers’ games as a kid growing up in Houston. Therefore, he heard Chuck announce players he grew up watching, then to experience that in his playing career, and now even young players living that is a treasure. “Those are things that you don’t see as a player, I didn’t realize for a few years in my Rangers’ career what a big deal Eric Nadel was, and that’s the same thing. I didn’t realize what a big deal Chuck Morgan was.”

Dak even did the “it’s baseball time in Texas”. pic.twitter.com/0qGcWBWQ6H

Elvis Andrus and David Murphy say it’s weird as visitors when there’s not as much “emphasis” in Chuck’s voice, by design, when calling their name. However, it’s still Chuck Morgan’s voice. “It feels good because it was his voice,” Andrus told me. “As soon as he talked, all of the memories [came back].”

Michael Gruber joined the Rangers production team a few years ago and is learning through Chuck Morgan. Grubes took over as Rangers’ music director in 2020 to take some ease off of Chuck. “Chuck is the soundtrack to the Texas Rangers fan experience, literally!” Grubbs told me. “Since 1983, his voice, his music choices, and his innovative ideas have created the best fan experience in baseball. He is a legend and immensely deserving of the honor to be inducted into the Texas Rangers Hall of Fame.”

Saturday’s ceremony warmed up the hearts of Rangers’ fans. It took fans back to mid-2010 but remains a tradition that keeps going [in Chuck’s case].