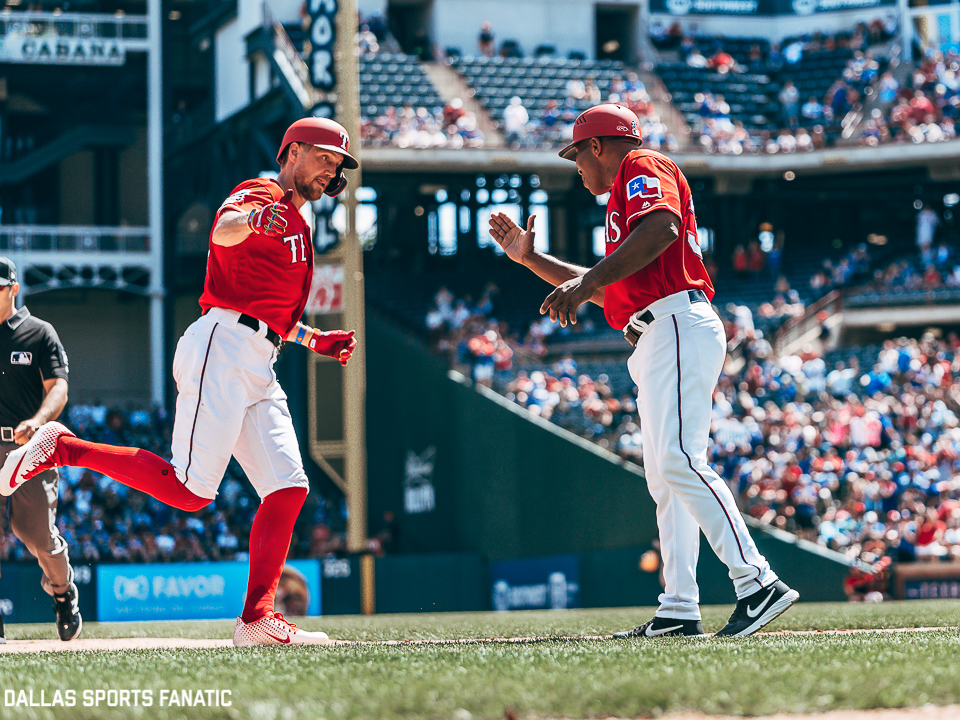 What happened with the Rangers last week; needed restful week ahead

What happened with the Rangers last week; needed restful week ahead

This past week is one we’d like to forget as Rangers fans. The team went 2-5 on their west coast trip against the Oakland Athletics and Seattle Mariners and they now sit with a record of 14-13 at third in the AL West.

After getting swept by the A’s, the Rangers followed it up with splitting a series with the Mariners. The week started off with the season’s longest losing streak of five games followed by two huge wins to cap off the week.

The Rangers must’ve gotten ahold of our own, James Holland’s, piece about their road woes. As soon as that was published, the team turned it on with a couple of wins since.

The Rundown: Mike Minor’s worst start since Opening Day comes in Oakland as he allows four ER over six innings pitched. The lone run on offense came off a Patrick Wisdom single plating Jeff Mathis. Elvis Andrus left this game with an injury scare after getting hit by a pitch to his right hand. X-rays came back negative, but the Rangers captain dealt with bruising and was rested two days later.

The Rundown: Joey Gallo and the exciting Danny Santana came to play Tuesday and that was about it. Gallo went 3-4 with a walk and a run scored, while Santana went 3-5 with 2 RBIs also adding a run. Apart from that, Lance Lynn was atrocious with his approach. He allowed eight runs over 4.1 innings pitched, six of those runs came in the fourth inning before getting pulled for the AA Frisco call-up, Wei-Chieh Huang. With a pitching performance such as that, it’s going to be difficult to get a win no matter how good your offense can be.

The Rundown: What a sloppy series this was. It almost hurt to watch the Rangers get manhandled as they did against a division rival. Not to mention former Ranger, Jurickson Profar making Sportscenter Top 10-worthy plays against Texas with a diving grab at second base. At the end of the day, we can all just put this series behind us and keep trucking along. The Rangers will try it all over again when they head back to the Oakland Coliseum at the end of July.

The Rundown: Those road woes continued on. While the Rangers looked to get their starting pitchers back in order with much-needed rest and injuries hitting all at the same time, Taylor Hearn had his MLB debut. Needless to say, it didn’t go as planned. The 24-year-old Royse City native allowed four ER, walked four including the first three batters of the game and was pulled after recording only one out in the first inning. At the end of the game, Hearn said it in the best way possible using one of many famous Nelson Mandela quotes, “You either win or you learn, but you never lose.” Let’s hope Hearn learned a lot in his big-league debut.

The Rundown: Nomar Mazara is finally easing out of his early-season slump. Today, he went 3-5 with 3 RBIs and a two-run dinger on his birthday. However, it was Shin-Soo Choo’s late game heroics. In a pinch-hit plate appearance, Choo ripped a solo home run in the top of the ninth to tie the game at four. That eventually led to the Rangers first extra-inning game of the season. It appeared that home-field advantage worked because Seattle was able to close out the game with a walk-off grounder. With the bases loaded, third baseman, Logan Forsythe, makes a questionable decision.

The Rangers lose the game on a double play grounder on which Logan Forsythe triple pumped. …. He could have gone home for force. Wow.

The Rundown: Now the fun begins. Everyone who had a plate appearance contributed with at least one hit as the team combined for 20 hits. Andrus (4), Gallo (9), and Odor (1) all homer in what was an exciting game, to say the least. Odor got his first of the year, while Gallo smacked a club record of nine HRs before May. The first Ranger slugger to do so since Josh Hamilton in 2012. Not to mention Mike Minor had a stellar outing pitching a career-high 13 strikeouts over seven innings. He is the 14th pitcher in Rangers history to match that feat joining guys like Nolan Ryan, Yu Darvish, Gaylord Perry, Jim Bibby and Cliff Lee.

The Rundown: The Rangers were just as excited for the weekend as we were. The offense is absolutely on fire and Lance Lynn found his ace form we all wish to see. All but Isiah Kiner-Falefa had a base hit on Sunday’s 17-hit, rout over the Mariners. Choo, Forsythe, Andrus and Pence all homered along with Pence’s very own 4 RBIs. Danny Santana and Hunter Pence both had three hits and were major contributors of this offense from the start. Danny Santana is really making his case to stay in the bigs – he must like the DFW metroplex more than Nashville, I don’t blame him. All in all, what a rough start to the week this was for the Rangers – we’re all just glad they bounced back and gave us an exciting weekend.

4/24 – 2B Rougned Odor sent on a rehab assignment to Nashville Sounds.

Tuesday-Wednesday: at the GLP.

A Look Ahead: A rare mini-series against an NL opponent means we will see Sampson and Miller get a couple of at-bats. It will be Sampson’s major league plate debut, while Miller has seen one fly over the fence in his career. We’ll see if they can determine a win for themselves by adding a run or two from their offense. There will be another two-game series with the Pirates six days later at their park.

Friday-Sunday: at the GLP.

A Look Ahead: You read that correctly: the club will have two days rest over the next week. One coming on Monday and the other on Thursday before and after the two-game home series to the Pirates. Talk about a blessing from the baseball gods above.

The Rangers will great their first look at baseball’s number one prospect, Vladimir Guerrero Jr., as the new-looked Toronto Blue Jays come to town. This is the first of two series against the lone Canadian team. Let’s all hope and pray that no one slides into Odor this go-around.

The Rangers are winning the World Series! How so?

Saturday and Sunday’s games were back-to-back wins with 13 runs or more. Only one other team in MLB history has accomplished that feat – the 1936 New York Yankees. They later went on to win the World Series that year. Lou Gehrig and a young Joe DiMaggio led that team while Elvis Andrus and Joey Gallo look to propel this team to the promised land. You heard it here first from @darienclark5 writing for Dallas Sports Fanatic.