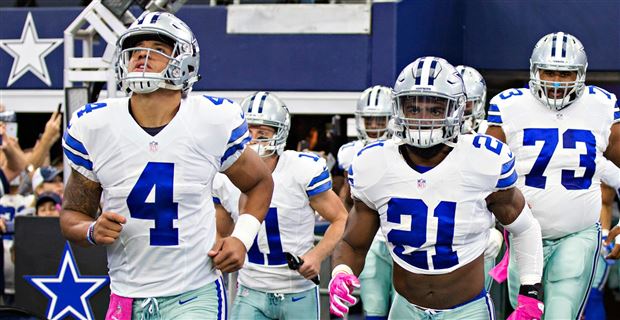 Who’s In, Who’s Out for regular season finale against Giants

Who’s In, Who’s Out for regular season finale against Giants

“Continuing momentum” has been something this Dallas Cowboys team has echoed all week long heading into their final game of the regular season. Majority of players will come out and tell you they want to play and they expect to treat this game like it was the first game of the season. With the division wrapped up and Dallas locked into the number four seed how big of a necessity is it to play key players. Here’s a list of players who must get some snaps on the field and those who need to sit this one out.

AT&T Stadium isn’t too far from the amusement park Six Flags Over Texas. But Quarterback Dak Prescott provides enough rollercoaster rides to put the Arlington attraction out of business. Prescott dazzles fans on the field with his gritty effort and baffles you the very next play with his lack of awareness. He recently said he wants to play to “continue momentum,” but not all momentum is good. In fact, you can argue he needs to try to establish some individual GOOD momentum for himself. A half should be good for him.

All-Pro Ezekiel Elliott comes into this game with a total of 381 touches on the season. He far outpaces anyone else in the league. The only motivation for him to suit up this game would be to secure his second rushing title in three years. However, Elliott and staff has been on record stating how his body has taken a beating this season. Also, it is important the running backs behind him establish some momentum themselves heading into the playoffs. The offense comes to a grinding halt when Elliott is out and this will give those behind him an opportunity to get a heavy dose of in-game action.

We all know Darius Jackson wasn’t going to be on the list of players who need a break. This has more to do with a battle for the second-string running back position moving forward. Rod Smith has vastly under-produced this season averaging 2.9 yards per carry on 32 attempts. However, it’s not all Smith’s fault. Smith is a volume back, which means he needs carries in order to get into the flow of the game. So far, this coaching staff has not indicated they will allow Smith to get in that sort of rhythm. Darius Jackson may be more suited to give a burst in a few plays then Smith would be able to. Jackson seems to always find his way back onto this team, so it has to be something the coaching staff is seeing. So throw him out there and let’s see it.

Demarcus Lawrence has shown us all we need to see. He’s going to get paid this offseason. Lawrence has been battling a torn labrum in his shoulder all season long. As with Elliot, having Lawrence sit will provide opportunities for Taco Charlton and Dorance Armstrong to get an increase in reps. Though you can be positive Lawrence wants to be out there, it wouldn’t hurt to protect him from offensive linemen smashing against his shoulder for three hours.

Find a way for Gallup to establish a reliable connection with Prescott. We’ve seen the impact of Amari Cooper. Gallup has also been a player who can space out the defense come postseason play. If the Prescott-Gallup connection can become more of a consistent threat then that will create additional running lanes for Elliot.

Red Zone troubles has burdened the Cowboys offense all season. Maybe a 6’8 270 pound target can correct that.