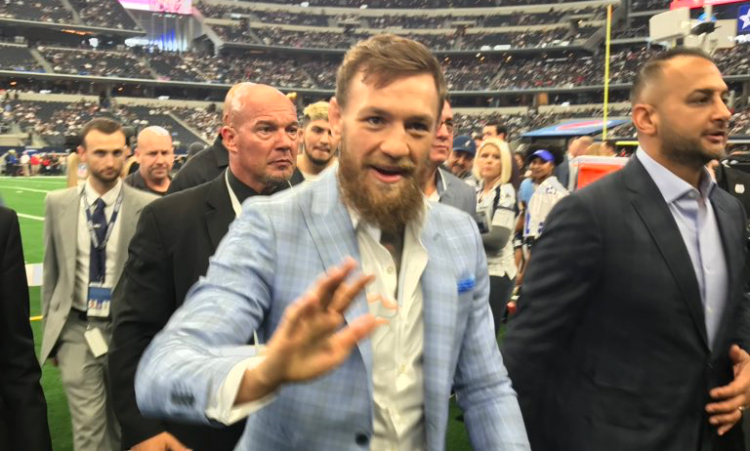 So… why in the world was Connor McGregor on the Cowboys sidelines?

So… why in the world was Connor McGregor on the Cowboys sidelines?

What if we told you prior to the Cowboys game against the Jaguars, Connor McGregor would be on team’s sidelines ‘chopin’ it up’ with Jerry Jones, hyping up the  ‘Boys defense, and then Dallas would go to rout Jacksonville.

Would you believe it?

If you know the craziness that is the Dallas Cowboys, you probably wouldn’t be surprised.

Well, maybe not with the McGregor part, but you get where we’re going with this.

According to DMN Sports Day reporter Jon Machotcha, the former UFC lightweight champion, who is fresh off his defeat to Kha Khabib Nurmagomedov in the Las Vegas Octagon just over a week ago, hit up AT&T Stadium before Sunday’s tilt against the Jags to meet with players and staff to promote his new whiskey, Proper No. Twelve.

According to the company’s website, Proper No. Twelve is “a smooth balanced whiskey with hints of vanilla, honey-like sweetness and toasted wood.“

For Cowboys fans, it’s likely a fun, filled way to deal with the roller coaster that is the Dallas Cowboys up and down season, but for the players, it appears to be the way  to land the team’s newest hypema.

“He just energized every place he went in the stadium,” Jones told Machotcha. “You’d like to say we’re going to have to get him in here for every game in order to have a good first half, at least.”

Officially, the Dallas Cowboys are a whopping 1-0 when Connor McGregor visits the team’s sidelines and his influence was clearly felt before, during and after the game.

Following his touchdown, late in the fourth quarter, Zeke celebrated with the famous “McGregor Strut.”

Even Dakota got in on the celebration following his 17-yard touchdown in the first quarter.

Dak got the @TheNotoriousMMA celebration down 💯

He’s also got the skills to compete for the team’s backup quarterback spot. Ya know, just in case Cooper Rush isn’t the Second Coming of Tony Romo.

The Cowboys are now 3-0 at home to start the season for the first time since 1999. If it takes another circus-like atmosphere with McGregor, free bottles of whiskey, and a little bit of Irish luck to get them going, I bet Jerry Jones would continue to welcome that.

McGregor and The Proper do Dallas!@ProperWhiskey @dallascowboys
McGregor Productions. pic.twitter.com/HRzOwwcsiQ

WE NEED TO INVITE CONNOR MCGREGOR TO EVERY COWBOYS GAME.

Of all the celebrities we’ve had over the years on the @dallascowboys sideline, @TheNotoriousMMA Conor McGregor has created the most buzz!! pic.twitter.com/6uGAKg2cCi