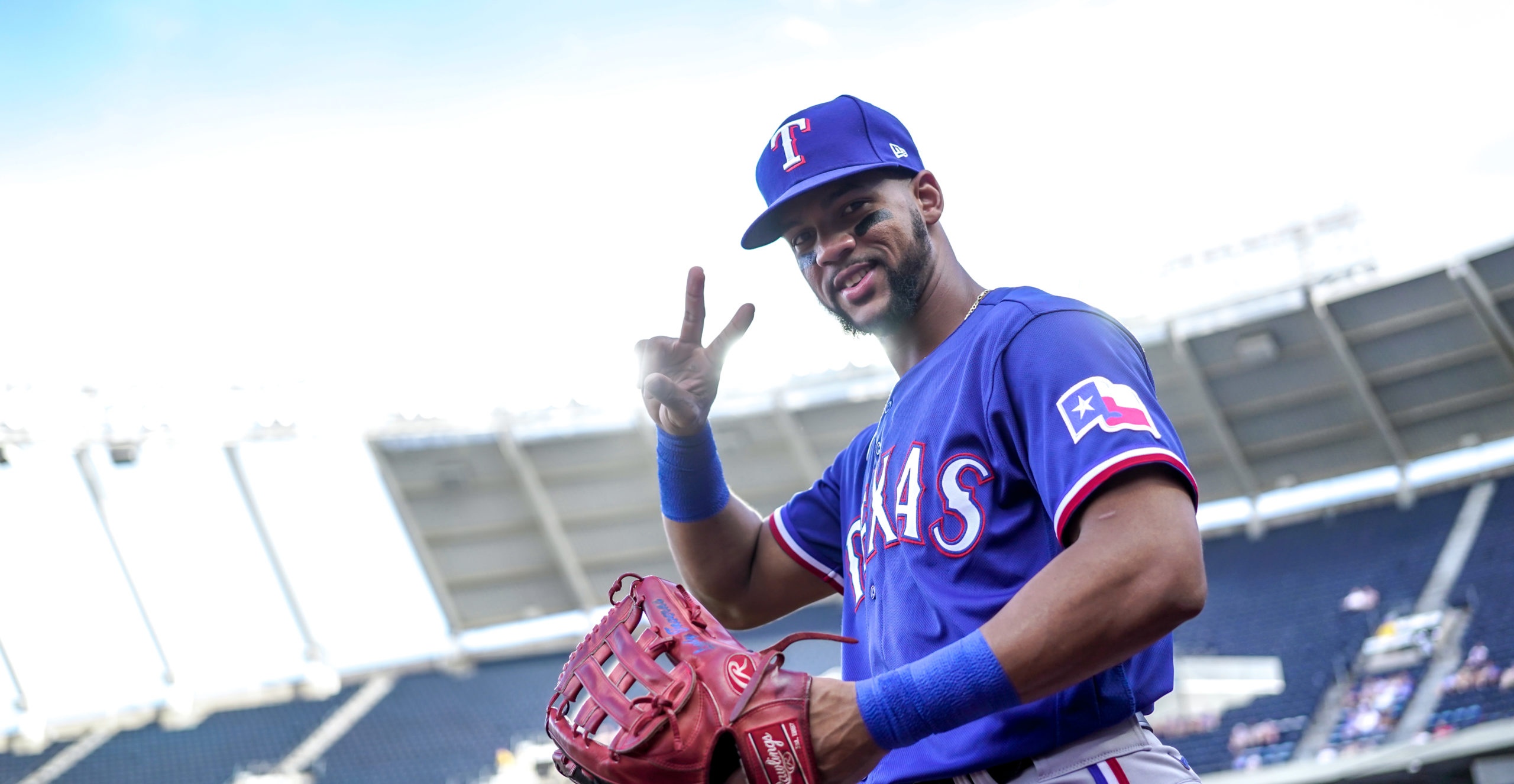 July was a frustrating month for the Rangers. It ended on a good note taking three of four from the Angels, but the number of close losses, blown leads, and missed opportunities infuriated Rangers fans. However, some positives came out of the month, and now that July is ending, we’re one step closer to the season ending and the cooler weather coming. So here are your Texas Rangers July awards:

In the month of July,

25 of the Texas Rangers 27 games have been within three runs or less at some point in the final two innings.

The only two was the last game before the break (vs SEA) and the first game after the break (at MIA). #StraightUpTX

Player of the Month: Leody Taveras and Corey Seager

Considering the overall numbers, Corey Seager edges out Leody Taveras in the power categories. Corey struck out nine times as opposed to Taveras’ 27 in the same number of at-bats. However, Leody had two more hits, five stolen bases, and more extra-base hits than Corey Seager. Seager earned an All-Star game nod with some would say a comeback performance to earn the nomination and participated in the Home Run Derby. I want to shoutout Leody for the turnaround he made and continues to make an impact with his bat, glove, and feet. In the last game against the Angels, Leody’s work in the outfield saved a run for the Rangers, preventing the Angels from taking the lead in the seventh inning.

If I had to choose one, I would say Leody Taveras because he surprised more people than Corey Seager. Seager’s struggles resulted from lousy luck where the luck was switching directions. The success for Corey was coming. For Taveras, seeing the change from adjustments showcases why the Rangers gave him chance after chance. I talked to him earlier in the month about what changed for Leody since the Rangers called him up in mid-June.

I’ve watched baseball for thirty years and cannot remember seeing a bounce with a kooky spin resulting in the ball going sixty degrees in the opposite direction. If anything, the ball looked like it was going to bounce barely foul considering the luck from the Rangers for the week. However, the ball had other ideas and took a wide turn fair, much to everyone’s dismay watching and calling the game. It wound up tying the game as Charlie Culberson hustled to the plate, barely getting his foot in. Unfortunately, the one-run curse against Seattle had a more potent spell, and the Rangers couldn’t win that night.

In the previous half-inning, Josh Smith made a ridiculous catch that creates another honorable mention. Well, the ball boy in Oakland showed off his skills that Saturday night. If he didn’t make the play, the ball would have come close to hitting Jonathan Hernández, who was warming up in the bullpen. After the ball boy makes the play, you can see some Rangers relievers start to clap, and the ball boy even makes a decent play a few batters later, prompting A’s and Rangers fans to chant “MVP.” I’m glad the kid got his minute to shine because he deserved it.

Pitcher of the Month: Jon Gray

You can automatically nominate Brock Burke and Matt Moore every month. The work those two are doing in 2022 is remarkable. Unfortunately, Matt Moore may be heading to another club on Tuesday, and it doesn’t appear that Brock Burke will surface in another role. For July, I chose Jon Gray as the Rangers pitcher because he’s showing why Texas went out in the offseason and got him. Gray’s slider is filthy, and his fastball is reaching career-high levels. I’ll admit I didn’t watch every Gray start with the Rockies, but I can’t imagine him hitting 98 MPH or close to 99. Jon and Martín Pérez are tag teaming as the Rangers 1-2 punch and a tough one. For more on Jon Gray, I talked to him and the coaches about why he’s turned the corner over the last few months.

Game of the Month: July 9th vs MIN

Here’s the recap of a wild Rangers win against the Minnesota Twins. It concluded with the former Twins catcher, Mitch Garver, getting revenge against his former team before ending his season with surgery.

Quote of the Month: Glenn Otto (July 17th vs SEA)

July had a few quotes throughout the month, and I urge you guys to check out my Rangers 7 series on YouTube. It was close between Taylor Hearn doing SportsCenter’s job and nominating Elier Hernández as a top ten play and Glenn Otto on the final day of the first half. During the game, Otto got hit with a broken bat, but he said he was fine. There was a scrape and some bruising, but he ultimately joked about it after the game. In fact, Otto pitched well after he got hit, prompting the quote provided after the game.

Rangers Glenn Otto said it got him on the ribs & skinned his hand. He's got a bruise on his ribs but he's good.

"Lesson learned [on a] broken bat, watch the bat, not the ball. Maybe that'll be my pregame ritual going forward. Hit me in the ribs with a bat." #StraightUpTX https://t.co/8rfqi4ZiB6

Unfortunately, I didn’t get any visuals of guys wearing the Cowboy Hat. Therefore now it’s imagination time. With the ten hats passed around in July, I narrowed it down to several choices. First, Jonah Heim wearing a Cowboy Hat has been a Rangers meme. Second, Brett Martin is a Tennessee native and, I would assume, owns three different Cowboy Hat styles. Ultimately I went with Spencer Howard. With the grown mustache and California laid-back style, I can see Spencer saying “screw it” one day and walking into the clubhouse with jeans, a belt buckle, cowboy boots, and the Hat to go along. So my pick this month is imagining the best Cowboy Hat look, Spencer Howard.

I feel like every year Anaheim provides us with fans making their presence known. I’m not sure what fascination this fan has with Corey Seager, but it sounds blood-curdling. Throughout the game, a fan screamed at the top of her lungs each time Corey Seager stepped to the plate. It either didn’t work or worked to perfection (if her goal was to have Seager reach base). Unfortunately, Corey left early during this game and didn’t return for the rest of the series. The Rangers return to Anaheim in September, so I’m wondering if she’ll make a return assuming Corey Seager is back in the Rangers lineup.

Can someone check on this person who sounds like they’re in excruciating pain when Corey Seager steps to the plate?

GIF(s) of the Month: Jonah Heim and Charlie Culberson (July 27 at SEA)

Jonah Heim is becoming a GIF machine. I feel like each guy has their code when they circle the bases (regarding  Leody Taveras and Adolis García), and now guys like Heim and Charlie Culberson are improving reactions. Jonah’s seems to be the finger bang, similar to the stereotypical wink and point guys do when trying to pick up ladies (I don’t see these at gay bars too often). I hope Heim keeps it up because if it becomes a trend. I can see Rangers fans in the stands doing the same when Jonah reaches base.

Meanwhile, Charlie Culberson’s double on July 27th had three different meme expressions combined into one motion. First, it was the side hand, then the Fonzie thumbs up, and finally, the shrug. The base hit was a double that scrapped the left field line tying the game. Therefore, I understand where the shrug came from, considering Charlie’s success against Mariners’ starter Marco Gonzales. I know each has their personality, but it would be excellent for the team to decide on a team base hit sign like the claw back in the 2010s.

Hey Charlie Culberson you’re now 10 for 21 against Marco Gonzales in your career how do you feel about that? @Rangers #straightuptx

Wardrobe of the Month: Emily Jones (July 15th vs SEA)

Sometimes, you say, “screw it,” and do what you want after a rough game. After a crushing loss against the Seattle Mariners, we walked into the press room for the postgame press conference with Rangers manager Chris Woodward. Emily entered and said she received some items in a Whataburger gift bag. It includes a hat, some sunglasses, and a mask. Emily puts the glasses and Hat on, and there we go. It was a cleanse we all need and maybe still need to this day.

“i don’t care about anything in my life right now” – emily, as this picture was being taken https://t.co/LuVrrTfZdn

There’s nothing like earning your first All-Star game nod in a ten-year career. In a rejuvenated season for Martín Pérez, he made his spot in the midsummer classic plus throwing a scoreless inning to his former battery mate Jose Trevino (who both honored Rangers third base coach Tony Beasley). The crazy part about this is that Martín proposed to his fiancé the night before the news went public. Of course, he knew in advance to gather his family together, but a proposal and an All-Star game nod in a few days is a hell of a week for the Rangers ace. The hope for fans is that he gets married while still with the Texas Rangers, but we all wait with the trade deadline looming. You can’t deny the suit he wore on the red carpet. I’m no fashionista, but it was blazing like a fire-flower that Mario throws in any Super Mario game.

Alright guys, no poll is necessary.

Both Martín Pérez and Jose Trevino had Tony Beasley on their Stand Up for Cancer. pic.twitter.com/GB0rN2Kvtq