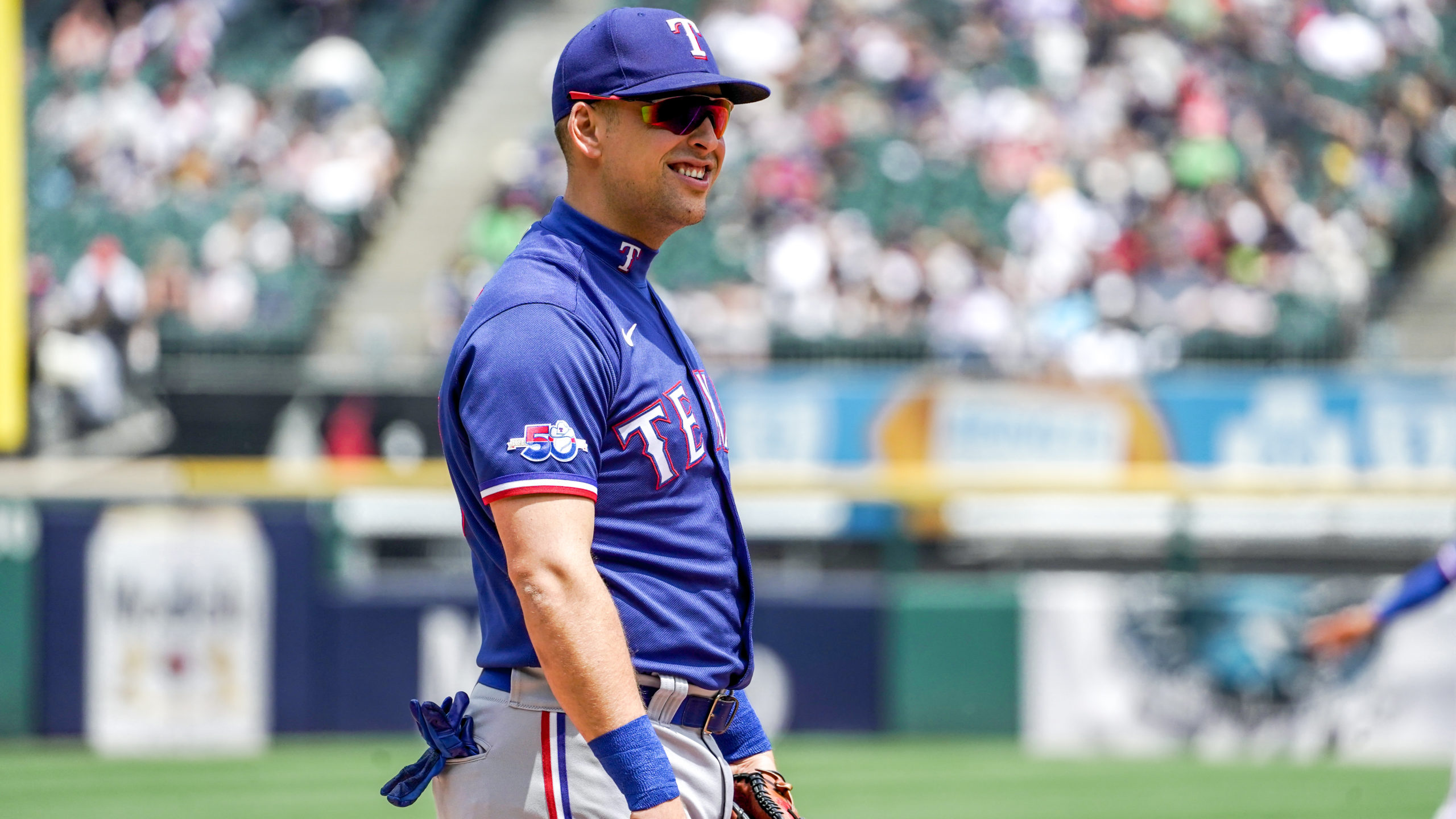 August 2022 in Texas Rangers history will go down as one of the strangest months in franchise history. The month started with Matt Bush going to the Brewers during the trade deadline, followed by introductions of Kumar Rocker and Brock Porter, along with Cole Ragans and Bubba Thompson debuting (forgot about those things, right?). Then the team let go of Chris Woodward and Jon Daniels. To say it has been the “dog days of August” is an understatement, but the Rangers had an opportunity to make it a positive month late. Heading into the last home stand, the Rangers were 11-12 with five games remaining. Unfortunately, a 1-4 stretch capped off a 12-16 August, and we’ve reached the final stretch of the season. Let’s look at the awards for this crazy month.

Player of the Month: Nathaniel Lowe

Something is wrong if Nathaniel Lowe isn’t your Rangers player of the month. Lowe had a historical August with 42 hits and hitting .389 overall. In addition, Lowe had an on-base percentage of .450 and an OPS of 1.098. I know people will nitpick the power numbers, but the key is putting pressure on pitchers and getting on base. “I’ve done a good job at getting pitches to hit and not trying to do too much,” Lowe told me.

Now it’s about keeping the consistency and riding the momentum into September thus finishing the season strong. “It’s one day at a time. That’s all I can do. It’s having a good day every day [that] I get a chance to compete. I’d like to continue to get better with the fastball. I felt like I missed a couple the last couple of days. Granted, they are elite-level fastballs from [the Astros], but I need to continue to improve on that and keep going forward,” Nathaniel said. Lowe’s 2-for-2 performance on Wednesday has him over the .300 batting average mark on September 1st, making him one of thirteen qualified MLB players to hit that mark on September 1st (one of five American League players).

Yes, it was a blowout, but a popup went into foul ground in the ninth inning. Nathaniel Lowe navigated to the owner’s side, caught the ball, and budged into the netting. While he was a little bit away (maybe 3-4 feet), you can see Rangers owner Ray Davis in the shot with some other reactions.

Pitcher of the Month: José Leclerc and Glenn Otto

Don’t look now, but José Leclerc is slowly evolving back to the pitcher he was before the elbow issues and Tommy John surgery. The Rangers use Leclerc in many roles, including multi-innings and secondary closer. “He’s been a stabilizing force,” Tony Beasley said on José Leclerc. “It seems like settling back in and looks like the José Leclerc we knew before the injury. The closer type mentality and closer-like stuff. I’m happy where he’s at, how he’s throwing the ball, and how he’s competing.” In thirteen appearances in August, Leclerc picked up two saves, allowed four walks, struck out twenty-one, and had a WHIP of 0.74 in 17.2 innings.

On the starting pitching side, Glenn Otto had a solid August. Glenn and Doug Mathis talked about the progress Otto made from the start of the season to current and it translated to the best starting performance among the Rangers in August. Otto finished the month 2-1 with a 2.93 ERA with an opponent average of .178. The kicker is the walks with sixteen in 27.2 innings. It feels like limiting the walks is the last piece Glenn Otto needs to be an extreme force in the rotation. However, he did prove he could limit damage and get out of tough jams, which is essential in development. So it was a good month for Otto.

Game of the Month: August 4th vs. CHW

Here is the recap on an essential day in future Rangers history.

Quote of the Month: Tony Beasley (August 30th vs. HOU)

Tony Tuesdays are a thing, and it’s a glorious thing. Beasley is among the most inspirational people, so it’s no shock that the Rangers named him interim manager. There were a lot of quotes to choose from (just from Tony Beasley), but some things are more significant than baseball. Tuesday, August 30th, was a big day on the field and in the stands. You had a game with two black managers (Dusty Baker and Tony Beasley), and in the stands, roughly 900+ representatives were playing in the Gay Softball World Series. It was a day celebrated in diversity and inclusion, and I asked Tony Beasley about that.

Regardless of what happens on the field tonight,

the game features two black managers plus an anticipated crowd of 900+ associated with the @DallasGsws. A lot of diversity in tonight's game. Talked to Tony Beasley about that today. #StraightUpTX #LevelUp https://t.co/tV8jY5Leu3 pic.twitter.com/xUdGXnZTY8

Also, I want to give an honorable mention to Charlie Culberson’s honesty. I talked to Charlie about when younger players make their debut and what impact that can have on a team. In addition, I asked Charlie who’s faster, Leody Taveras, Eli White, or Bubba Thompson. Here was Charlie’s answer:

Rangers fans got two looks at the Cowboy Hat in August. First, Dane Dunning wore it postgame after shutting down his former team, the Chicago White Sox. Both times Dane won the hat, he wore it postgame (April 30th vs. the Braves). The look that sparked a t-shirt came back as Kohei Arihara sported the Cowboy Hat on August 21st in Minnesota. I still see the Arihara shirts from early May walking around the Rangers clubhouse, and Kohei rocks it well. Although with the change in team direction, I’m nervous that the Cowboy Hat will end after a two-year run, but that’s March 2023’s problem.

Oopsie of the Month: Rangers bullpen (August 23rd at COL)

I have never been to Coors Field, but I hear it’s a beautiful place, and center field looks gorgeous. Do you know who also thinks that way? The Rangers bullpen. In the bottom of the first inning of game one, the Rangers pen decided to get a glimpse of the action from dead center field. I’ve seen former Ranger Joely Rodriguez chill there numerous times, but we’re talking five or six people spectating, which caught the eyes of home plate umpire Bill Miller telling the bullpen to get off. The best reaction came from Brock Burke, who fled like a little kid who knew he’d get in trouble for taking a cookie from the jar but did it anyway.

Your culprits were Matt Moore, José Leclerc, Jonathan Hernández, Brock Burke, and Brett Hayes. The next day, Hayes put tape to prevent anyone else from making the same mistake. While it was unrelated, the Rangers put sixteen runs, so maybe Hayes needs to put caution tape around the bullpen again for no reason.

Friend of the Month: Jeff the Rally Pidgeon (August 12th-14th vs. SEA)

Jeff the Pidgeon became a Rangers icon overnight; thanks to Levi Weaver for the naming process. In a series against the Seattle Mariners, a bird flew throughout the ballpark starting Friday night. He kept popping up throughout a series against the Mariners. Ironically, the Rangers won the series against Seattle, including a huge rally on Saturday thanks to Jeff. Unfortunately, Jeff was primarily silent during the last home stand but will always win the hearts of Rangers fans.

The baseball world lost its voice on August 2nd. Vin Scully passed away at the age of 94. Scully was a national treasure, and any baseball fan recognized his voice whenever you tuned into a game, and he was on. In my lifetime, Scully was the epitome of Dodgers baseball, and I recall seeing a Vin Scully video in 2020 when the Dodgers won the World Series. After the game on August 2nd, the media spoke with former Dodgers like Charlie Culberson, Corey Seager, and Chris Woodward. Both Seager and Culberson recall Vin’s last game, which coincidently ended on a Culberson walk-off home run. The next day, the Rangers put a tribute video together.

Both Charlie Culberson and Corey Seager reflect on Vin Scully.

Both also recall Scully's last home game where Charlie Culberson walked it off on a homer. #StraightUpTX #Rangers pic.twitter.com/IwCuNWBxhx

On Saturday, August 13th, the Rangers honored Ian Kinsler and John Blake into the Texas Rangers Hall of Fame. It was a grand ceremony as it brought fans back to the 2010s and the championship-caliber teams that are the heart and soul of the franchise.