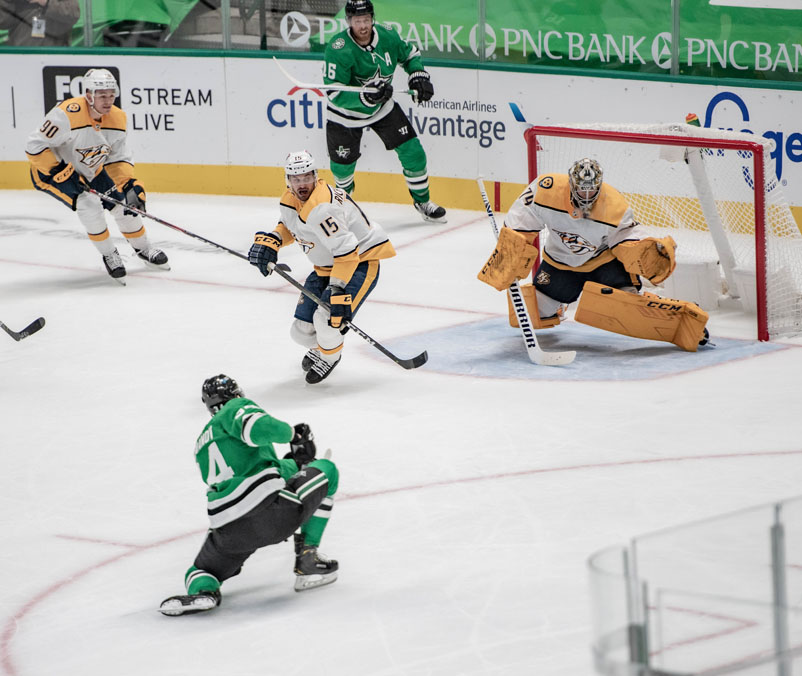 Dallas’ 24-year-old Finnish forward has burst onto the scene in the 2021 season- pacing the team at over a point-per-game pace in just 29 of the team’s 40 games in the COVID-shortened year.

Hintz shone brightly in a solid week overall for Dallas- racking up a blistering eight points off of two goals and a sparkling six assists in the split with Chicago followed by the weekend win over Florida and Sunday’s overtime loss to Nashville.

If the Stars are able to catch fourth-place Nashville in the race for the Central’s final playoff spot, it will almost certainly be on the backs of Hintz and rookie Jason Robertson- who has thrust himself into the Calder trophy discussion with Minnesota’s Kirill Kaprizov- who is currently the run-away favorite for the award given to the league’s top first-year player.

Here’s a look how each unit looks headed into week number three of April.

Dallas’ nine-goal burst in the Thursday’s game against Chicago and Saturday’s win over Florida might have been the most promising consecutive offensive performances all of 2021. The aforementioned Hintz and Robertson have been the spark- skating on the top line together and combining for a rock-solid +17 plus/minus.

The Stars haven’t just gotten effort from the top line, however- bottom-six forwards Andrew Cogliano, Blake Comeau and Joel L’Esperance have all scored in the past week. Dallas needs to click as a whole offensive unit to make a playoff push.

The possible returns of Alexander Raudlov and Tyler Seguin could be the shot in the arm this group needs to win more games in regulation.

The narrative continues- Dallas’ elite defense continues to keep it in close games. The problem has been getting enough offense to win those close games. After an outlier against Chicago, Dallas held three playoff contenders in Chicago, Florida and Nashville to just five goals in three games.

There have been positive signs for the Stars power play in recent weeks. Dallas now sits fifth the NHL with the man advantage, scoring at a 29 percent clip. Miro Heiskanen offered a ray of sunshine in what’s otherwise been a partly cloudy offensive campaign with a goal on a one-timer in Thursday’s win- one of the Stars two power play markers that evening.

The penalty kill remains stuck in neutral, however, checking in at 18th in the league at 79 percent.

Anton Khudobin returned with head coach Rick Bowness from a brief COVID pause in a big way this week. Dallas’ listed starter recorded 20 saves against 21 shots against one of the league’s top teams in the win over Florida on Saturday, and then followed it up with several highlight-reel saves to keep the team in the game on Sunday.

Interestingly, as Ben Bishop possibly nears a return, general manager Jim Nill has stood behind Khudobin and suggested that the team could rotate between Bishop, Khudobin and rookie sensation Jake Oettinger- who has been a top-20 goalie in many measurable ways- instead of flipping Khudobin at Monday’s trade deadline.

April has been much kinder to the Stars than February and March. The team has won four games, and taken points in five of seven.

The team’s biggest problem has been failure to take points in overtime and shootout contests. With Sunday’s loss, the Stars fell to just 2-11 after regulation- including 0-4 against Nashville- who is 8-1 in such scenarios. Dallas failed to put a puck in the net in the shootout at all.

It will likely be the same personnel as the Stars attempt to buck the narrative of overtime woes and salvage a third-straight playoff appearance.