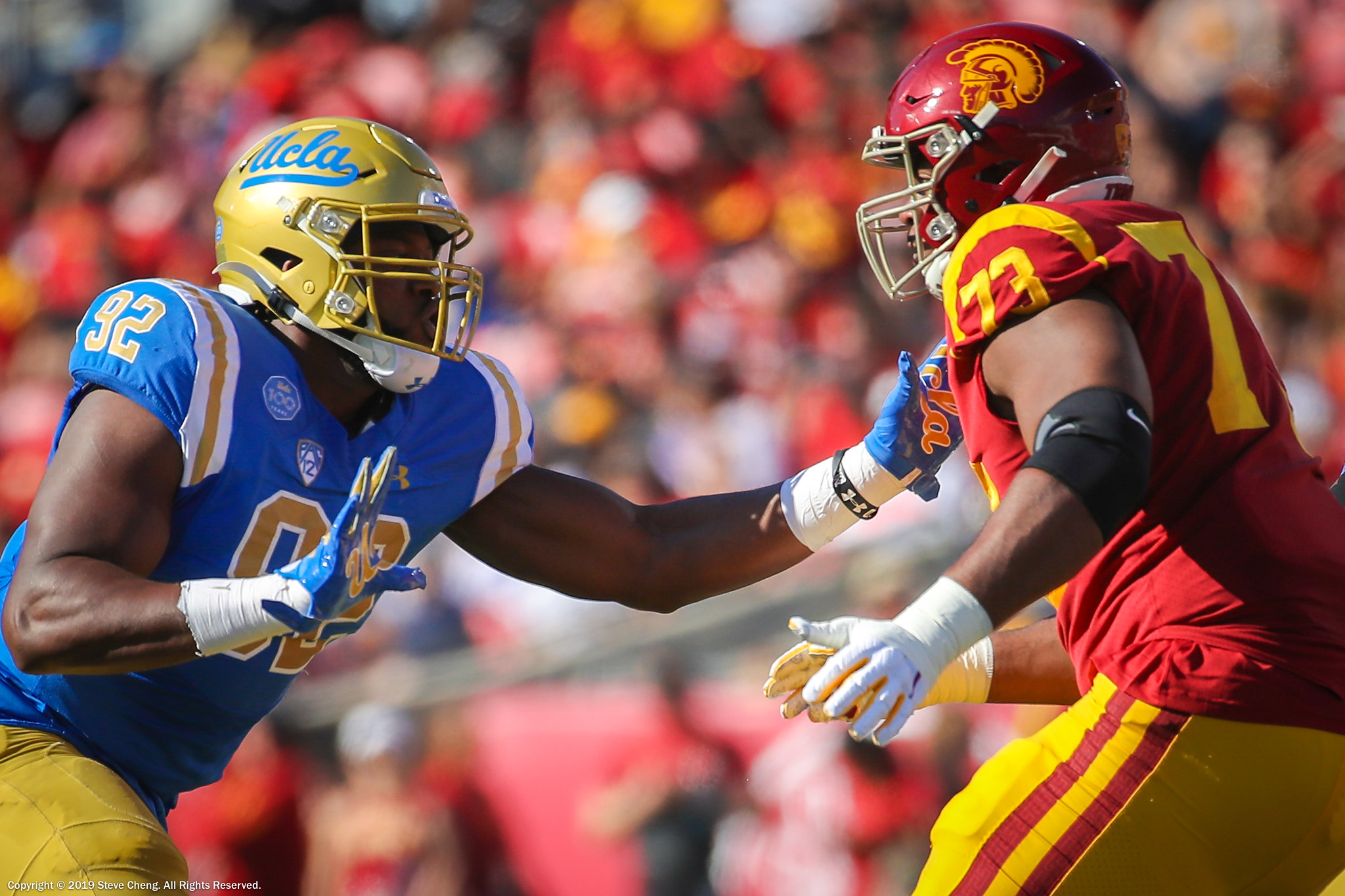 NFL Draft Review: Odighizuwa can be disruptive for interior line

NFL Draft Review: Odighizuwa can be disruptive for interior line

A first-round trade with the Philadelphia Eagles netted them the 12th overall pick (Micah Parsons) and an extra third-round pick. The Cowboys didn’t hide the fact they wanted to address a defense that struggle tremendously in 2020.

“: A three-year starter at UCLA, Odighizuwa played nose tackle in defensive coordinator Jerry Azzinaro’s 3-4 base scheme, seeing snaps everywhere from the zero to five technique positions. He became a starter as a sophomore and finished his career with more tackles for loss (27.5) than games started (27). A threetime state champion wrestler in high school, Odighizuwa translates several of those traits (balance, toughness, leverage) to the football field, using his powerful hands and backfield vision to defeat blocks and pursue the football. As a pass rusher, he needs to weaponize his rush moves and trust his technique to unlock his ability. Overall, Odighizuwa needs to improve his efficiency as a pass rusher, but he has disruptive qualities with his length, power and quickness and he shouldn’t be scheme-dependent in the NFL.” – Dane Brugler, The Athletic

The admiration surrounding Osa Odighizuwa is his ability to create chaos. He had 27.5 tackles for loss and 11.5 sacks in 43 games. Odighizuwa is light for a defensive tackle, but his size allows him to be quick enough to get into gaps.

Antwaun Woods led their interior linemen in sacks with one, while Neville Gallimore led in tackles for loss (4.5). Odighizuwa started 27 games while at UCLA, but his size may cause him to be a situational pass rusher at the defensive tackle position for Dallas.

Especially considering defensive coordinator Dan Quinn had players such as Tony McDaniel (6’7, 305) and Brandon Mebane (6’1, 311) anchoring his defense in the middle.

We’ve seen Dallas employ the smaller, quicker, defensive tackles in previous years and it hasn’t always led to success. Odighizuwa has active hands and has some upside as an interior pass-rusher. He had a high-volume snap count (64.3 defensive snaps per game in 2020) and was experienced and productive at various positions on the defensive line.

However, it’s to be seen how often he will be able to find the field in his scheme this year.